The sowing campaign for the harvest-2021 has risen on the background of the devaluation of the ruble. According to the Ministry of agriculture on August 14, winter crops for the harvest-2021 planted on 155,5 thousand ha or 0.9% of the forecast area. This week on the start of the sowing campaign, in particular, reported Samara and Orenburg regions and Bashkortostan. In the near future will begin w...

Siberian Federal scientific center of agrobiotechnology (CPNCA), RAS will develop the concept of development of the grain market of Siberia until 2025, said in a statement on Friday, the message on the website SFNCE wounds. "By results of discussion the Council of the MASSES (the interregional Association "Siberian agreement") decided to approve the project proposal of the concept of the interreg...

17 Aug 2020
The security of the Russian agrarians with seeds of winter cro...

As of 12 August in the presence of Russian farmers were 2.42 million tons of seeds of winter crops with the needs of 3.79 million tonnes. This was reported by the press service of "rosselhozcenter". The share of certified seed material as available at the reporting date was 98.6%, slightly higher than last year in this period (98,3%). It is reported that currently, 1.2% of the available seeds do ...

The price of cereals in the new season will depend on the volume and quality of raw materials. Gross harvest of major cereal species of agricultural crops this year will not be lower than that in 2019, the Director of the analytical Department of the Russian grain Union (RGU) Elena Tyurin. "The crop of oats will increase compared to the previous year by 2% to 4.5 million tonnes, the harvest of mi...

17 Aug 2020
The agriculture Ministry is preparing proposals on the extensi...

On 14 August the Minister of agriculture of the Russian Federation Dmitry Patrushev made a working trip to the Udmurt Republic. The main theme of the visit was the implementation of the state program "Complex development of rural territories", which was launched in 2020. In particular, the Minister called for a new culture House in the village of Sosnovka, where he held a meeting during which toge...

17 Aug 2020
Abramchenko instructed to work out mechanisms to reduce price ...

Foreign agricultural service of USDA (FAS USDA) increased the forecast of wheat harvest in Russia by 1.5 million tonnes to 78 million tonnes Estimation of gross yield of other cereals has been reduced from 40 million tons to 38.93 million tons, while projections for corn and barley remained unchanged: 15.3 million tons and 17.3 million tons of American analysts traditionally do not take into accou...

14 Aug 2020
The Ministry of agriculture of Russia offers to subsidize the ...

The Ministry of agriculture of the Russian Federation proposes the inclusion of complex mineral fertilizers in the list of goods the carriage of which the far East by railway transport at reduced rates kompensiruet from the budget. The corresponding document was published on the Federal portal of projects of normative legal acts. Earlier, in April last year, the Russian Government approved rules ...

During the reporting period the main buyer of Russian agricultural products was China. The export of agricultural products since the beginning of the year to 9 August amounted to $15.4 billion, which is 13% higher than a year earlier ($13.7 billion). While the supply of meat and dairy products reached $661 million (plus 64%), oil and fat $2,97 billion (+27%), products of food and processing ind...

Russia will increase exports of wheat this season

Russian export the shipments of wheat maintained at the level of the previous forecasts of 36.1 million tons. The forecast for wheat stocks at the end of the marketing year has been revised downward, from 12.0 million tons to 10.8 million tons.

Analysts ' forecasts of the International grains Council on wheat balance of payments of Kazakhstan has changed for several items.

Total wheat stocks in Kazakhstan are estimated for the current season at 14.2 million tonnes. In may, based on this position was $ 14.6 million tons of grain.

In the food industry, as in the may forecast, it is expected to use 2.3 million tonnes of wheat. The livestock sector volume forecast use of wheat for animal feed amounted to 1.4 million tonnes, 0.1 million tonnes below the may estimate.

The export potential of Kazakhstan in deliveries to the foreign market, as before, is projected at 7.5 million tons of wheat.

At the end of the marketing year 2020-2021 in Kazakhstan is projected wheat stocks in the amount of 1.1 million tons. The may assessment of the final inventory of the season was 1.3 million tons.

The forecast for wheat stocks in major exporting countries at the end of next season reduced from 67.8 million tons to 64,9 million tons.

In the 2020/21 season, the world grain production could reach mln tonnes 2237,3 noted in the June report, the International grains Council (IGC). This was 7 million tons more than predicted in may.

The Outlook change is due to the instability of weather in the countries of the European Union and in the black sea region, noted in the report of the International grains Council.


RUSSIAN EXPORT POTENTIAL FOR THE SHIPMENT
WHEAT MAINTAINED AT THE LEVEL OF THE PREVIOUS
FORECASTS OF 36.1 MILLION TONNES

Prospective assessment of world stocks from last month (614,0 million tons) has increased by 1 million tonnes to 615 million tonnes, carry-over reserves of all types of grains although it will grow, but not essential. 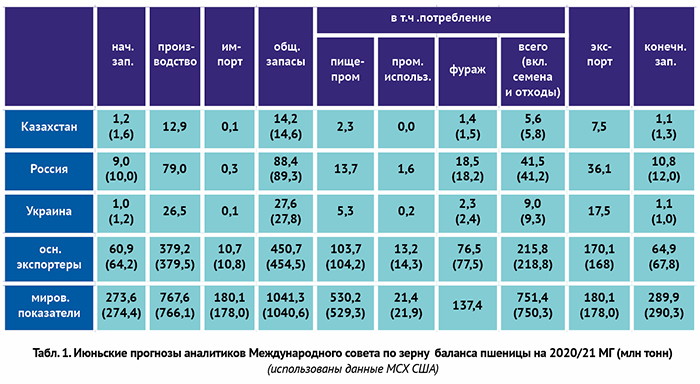 The exports of Russian grains in the season 2020/21 is expected to reach 45.4 million tonnes, including the 36.1 million of wheat. A month earlier, analysts predicted the export of wheat in the same volume. The may estimate of the volume of supplies of Russian grain on foreign markets amounted to 45.3 million tons.

As noted at the end of June analysts, export prices for Russian wheat have continued to decline because of improvements in forecasts of the new crop and after the fall of quotations in the world markets. However, the current price is higher than last year, according to the data of experts of the analytical center of "Rusagrotrans".

According to the Institute for agricultural market studies (IKAR), a ton of wheat with delivery in August cost $197 (minus $2), "Sovekon" has recorded a decline of $1.5 to $200,5/t

"I have the feeling that the market expects a new crop of the countries of the Black sea region will further decline in wheat prices", — the focus in the review "Sovekon". According to the head of the analytical center of "Rusagrotrans" Igor Pavensky, the contracts for July are mostly enclosed. Quotes for delivery in August remained unchanged at $195-198/t
According to "Rusagrotrans", on Russian market purchasing prices of new crop wheat (protein 12.5 percent) in the deep-water ports for the week fell by 300 rubles to 12.4-12.8 thousand rubles/ton, last year they constituted 10.5 thousand rubles/ton. The purchase price of low-water — 12-12,1 thousand rubles/ton a year earlier and 10 thousand RUB/t.

On the domestic wheat market remains in a transition period between old and new crop, says the Pavensky. In the center of the country price levels of new crop of about 10.5-10.9 thousand RUB/t (EXW without VAT), in the South, where the harvesting campaign has begun, bid amount to 11.3-11.9 thousand rubles per ton with delivery to the Elevator. Price range of new crop barley — 9,5-10,3 thousand RUB/t. 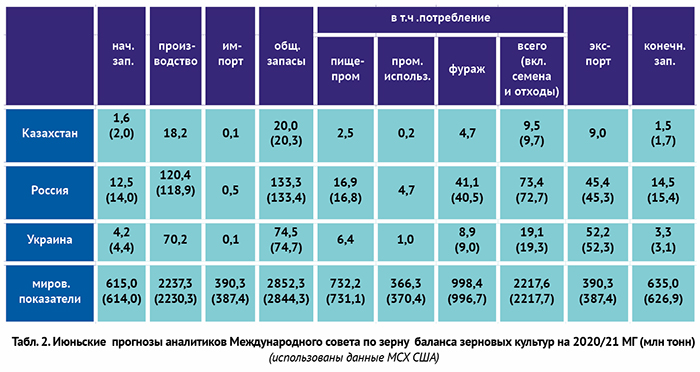 According to the Center for grain quality assessment, the first 763 tonnes of barley of the new crop harvested in the Krasnodar territory and the Rostov region, the region exported to Morocco through the port of Azov.

On the domestic grain market in the first week of July, prices have generally declined, affected by increased supply of new crop and reduced demand from consumers.

For the period from June 26 to July 3, according to the monitoring of the National Union of grain producers of Russia, increased demand for feed grains in the center and the Volga region combined with the reduction in price of grain in other districts. However, for many categories of crops prices for the week have not changed.

Study of the dynamics of grain prices with the help of the software "Grain Monitoring" showed that the centre became more expensive wheat of the 5th grade, and corn for grain.

In the Urals Federal district, the demand for all other grains did not change. In Siberia fell all wheat grades and feed barley. The demand for food corn has not been changed.

Overall, Russia has retained its stable positions exporter on the world market, allowing analysts optimistic estimates of the potential of Russia's shipments of wheat to foreign markets.

Application for membership in the Union